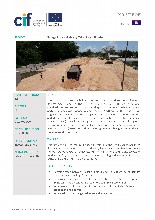 The project seeks to rehabilitate the most deteriorated segment of one of Belize's main highways, the George Price Highway (GPH), up to national standards and to preserve it through adequate maintenance while improving and guaranteeing road connectivity between the Northern, Southern and Central Regions of Belize as well as enhancing physical connectivity with Central America and Mexico. The GPH is included in the International Network of Mesoamerican Roads (RICAM), which is recognized as important for physical regional integration and the progressive implementation of a Partial-Scope Agreement with Guatemala (2010) and other trade agreements being negotiated with Honduras and El Salvador.

This project aims to reduce transport costs and the road's vulnerability to flooding and other natural hazards, thereby increasing its resilience to climate change. Another objective of the project is to reduce road fatalities by increasing road user safety, ensuring adequate signaling, building pedestrian facilities, bike paths and installing other special safety features.