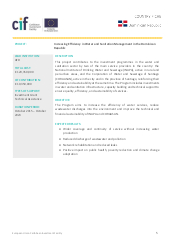 The objective of this project is support the reconstruction of infrastructures damaged by hurricane Matthew in October 2016 and flash floods in November 2017. The project will focus in the four provinces identified by the Dominican Republic Government as the most affected by these catastrophic events, namely Monte Cristi, Puerto Plata, Espaillat and Duarte. The project will involve the restoration or new construction of social and basic infrastructures, such as roads, bridges, hydraulics, housing and urban infrastructure. The interventions will be prioritized according to their social impact and contributions to restore livelihoods, reduce vulnerability and enhance resilience to climate change-related disasters in the provinces.

The project focuses on climate change resilience and will include a substantial element of risk prevention for future natural disasters (floods, tropical storms, earthquakes), with a particular emphasis on climate risks, including areas of preventive hydraulics, environment, resilient infrastructure and application of anti-seismic standards during the reconstruction process.  The Sub-Projects are primarily focused on housing for at-risk or vulnerable parts of the population, urban infrastructure, hydraulics, access to roads and bridges and support to the development of sustainable livelihoods.  Initiatives with a strong social impact in terms of poverty reduction and climate resilience are a priority.